The Department of Computer Science at the University of Liverpool was founded in 1983 when it was spun off from the Department of Statistics and Computational Maths. Starting as a predominately teaching-focused department, it has steadily grown in both size and reputation, now being internationally recognised as a site of high-quality research. It currently comprises 13 Professors and 40 other Academic and Research staff, supported by nine administrative and four technical support staff. The Academic Head of Department is Professor Boris Konev.

The department was initially based in the Victoria Building (the oldest part of the University and the original "Red-Brick University" building), before moving to the Chadwick Building on Peach Street. In April 2006, following a £5M refurbishment, the department moved again to the Ashton and George Holt buildings, at the heart of the University campus, and adjacent to its original home.

The postal address of the department is 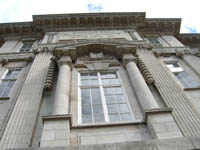 The Ashton Building, which is grade-II listed, contains the Student and Departmental Offices (both on the ground floor), together with most of the academic and research staff. It also provides seminar and meeting rooms, as well as a fully modernised lecture theatre on the first floor. This is building 422 on the campus map, and here is a google map link to Ashton Street.

This was the last of the buildings on the original University site to be constructed, and is in a classical style, contrasting with the Victorian brick and terracotta of the earlier buildings. It was erected between 1912-14 for the Faculty of Arts, to relieve pressure on space in the Victoria Building. It was renamed the Ashton Building, following the migration of the Arts Faculty departments to Abercromby Square in the 1950s and 1960s.

The Ashton Building is linked by a second floor corridor to... 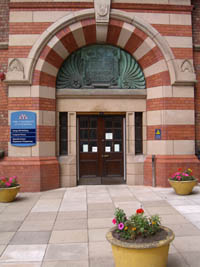 The building was opened in November 1904, and was named after a major benefactor of University College, Liverpool - the forerunner of the University. George Holt, who died in 1896, was a founding partner in the Lamport and Holt steamship line, and a prominent Unitarian. His widow, and their daughter, Miss Emma Holt, contributed a significant donation of £10,000 towards the erection of the building. Emma later left the family home, Sudley House, and its contents to the city of Liverpool, and this is now part of the National Museums Liverpool.

Liverpool is situated on the North-West coast of Britain, at the mouth of the River Mersey. It is just over two hundred miles from the UK capital London, and has good links to the rest of the country by road, rail and air. It has long been an important sea port, being the home of both the White Star Line and the Cunard Line, and there is still a strong shipping and container industry. And of course, the Mersey Ferry was immortalised in the 1960s by Gerry and the Pacemakers.

The University is sited not far from the city centre, immediately next to the Liverpool Metropolitan Cathedral of Christ the King.